© Griffith Institute, University of Oxford, 2013-. Unauthorized use and/or duplication of this material without express and written permission from this blog’s owner is strictly prohibited. Excerpts and links may be used, provided that full and clear credit is given to Griffith Institute and "Wonderful Things" Blog with appropriate and specific direction to the original content.
Browse: Home   /   My dear Gardiner 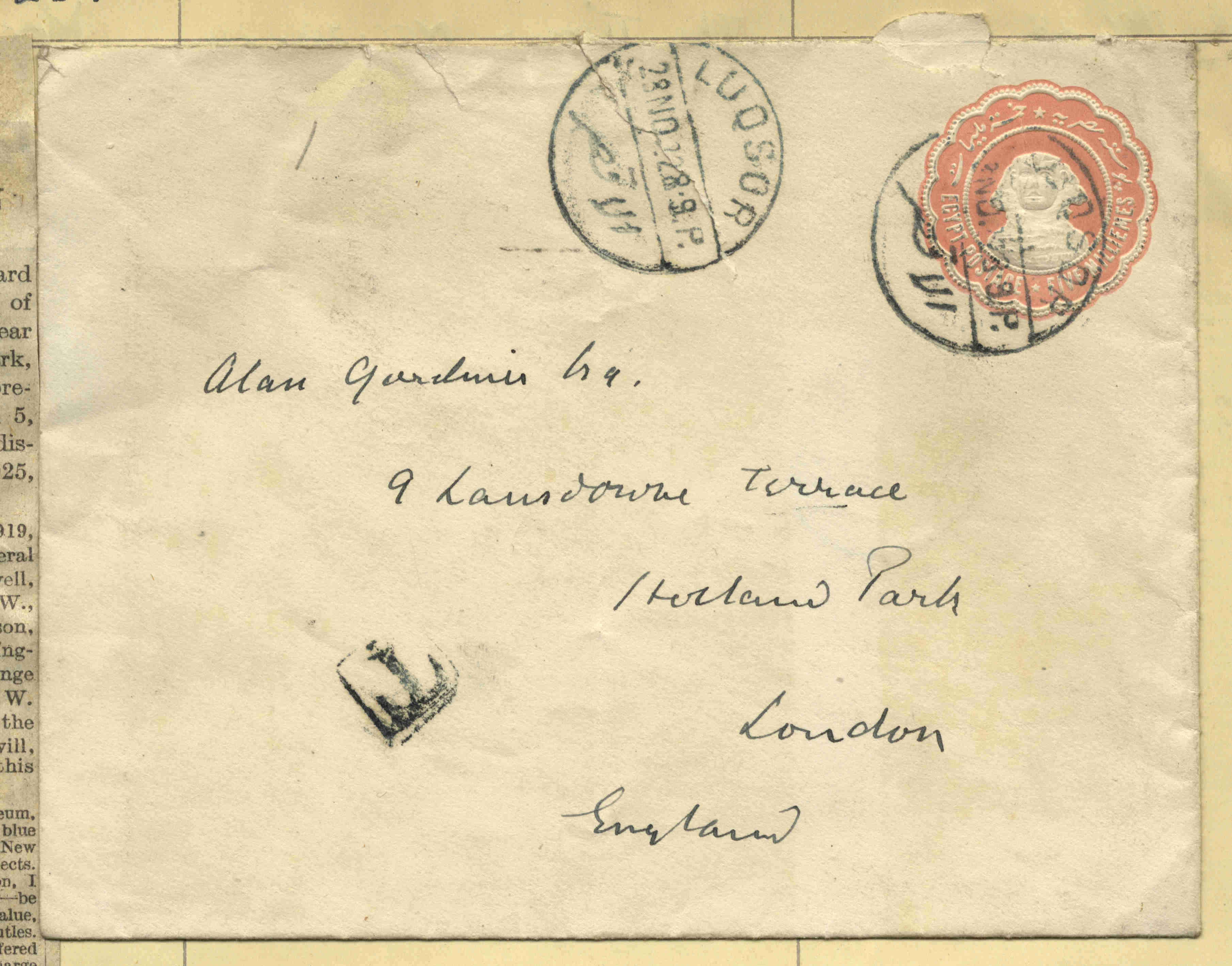 In an aged “Newspaper Cuttings” album, compiled by the great Egyptologist Sir Alan Gardiner, one unexpectedly finds two envelopes neatly attached to a page, seemingly at odds with the rest of the material. A tantalizing clue to their contents are the adjacent clippings announcing the discovery of the tomb of Tutankhamun, and when the first envelope contents are lifted out and unfolded, one is immediately compelled to read further when greeted with ‘Most private’!

This is Lord Carnarvon’s own account of the discovery, the elation flowing through his words is tangible, the inventory of the King’s treasures reading like a modern day ‘Wish List’. This is one of two letters written shortly after the discovery, both addressed to Gardiner whom Carnarvon wanted to entice with “a box with a few papyri in”, which disappointedly later proved to be rolls of linen.

The text of the letter is as follows:

I wrote to my wife yesterday & asked her to give you
a message.

The find is extraordinary it is a cache & has been
plundered to a certain extent but even the ancients could
not completely destroy it after some slight plundering the
inspectors shut it again. So far it is Tutankamon
beds boxes & every conceivable thing there is
a box with a few papyri in – the throne of the King the
most marvellous inlaid chair you ever saw –
2 life size figures of the King bitumenised (sic) – all sorts of
religious signs hardly known up to date[.] The King[‘s] clothing
rotten but gorgeous. Everything is in a very ticklish state owing
to constant handlings & openings in ancient times
(I reckon on having to spend 2000£ on preserving &
packing)[.] The most wonderful ushabti in wood of the
King[,] wood portrait head ditto endless staves etc.
some with most wonderful work[.] 4 chariots
The most miraculous alabaster vases ever seen
3 colossal beds of honour with extraordinary animals[.]
There is a further room so packed [or ‘hacked’ ?] one cannot see really
what is there – Some of the boxes are marvellous
chairs numerable a wonderful stool ebony
& ivory[.]

Then there is a bricked up room which we have
not yet opened[.] Probably containing the mummies
I should not be surprised to find therein
Tut & his wife & Smenkara & his, but so far
it[’]s all Tut.

There is enough stuff to fill the whole Egyptian
section upstairs of the B.M.
I imagine it is the greatest find ever made.
Tomorrow the official opening [Wednesday 29th November 1922]
& before I leave we peep into the walled
chamber.

I some how fancy it is the whole of the Amarna
outfit as on the throne the King & wife are represented
with sun disk[.]

I hope to be back soon. Carter has weeks of work ahead of
him[.] I have between 20 & 30 soldiers police
& gaffirs to guard.