© Griffith Institute, University of Oxford, 2013-. Unauthorized use and/or duplication of this material without express and written permission from this blog’s owner is strictly prohibited. Excerpts and links may be used, provided that full and clear credit is given to Griffith Institute and "Wonderful Things" Blog with appropriate and specific direction to the original content.
Browse: Home   /   The “dig house” at Abydos 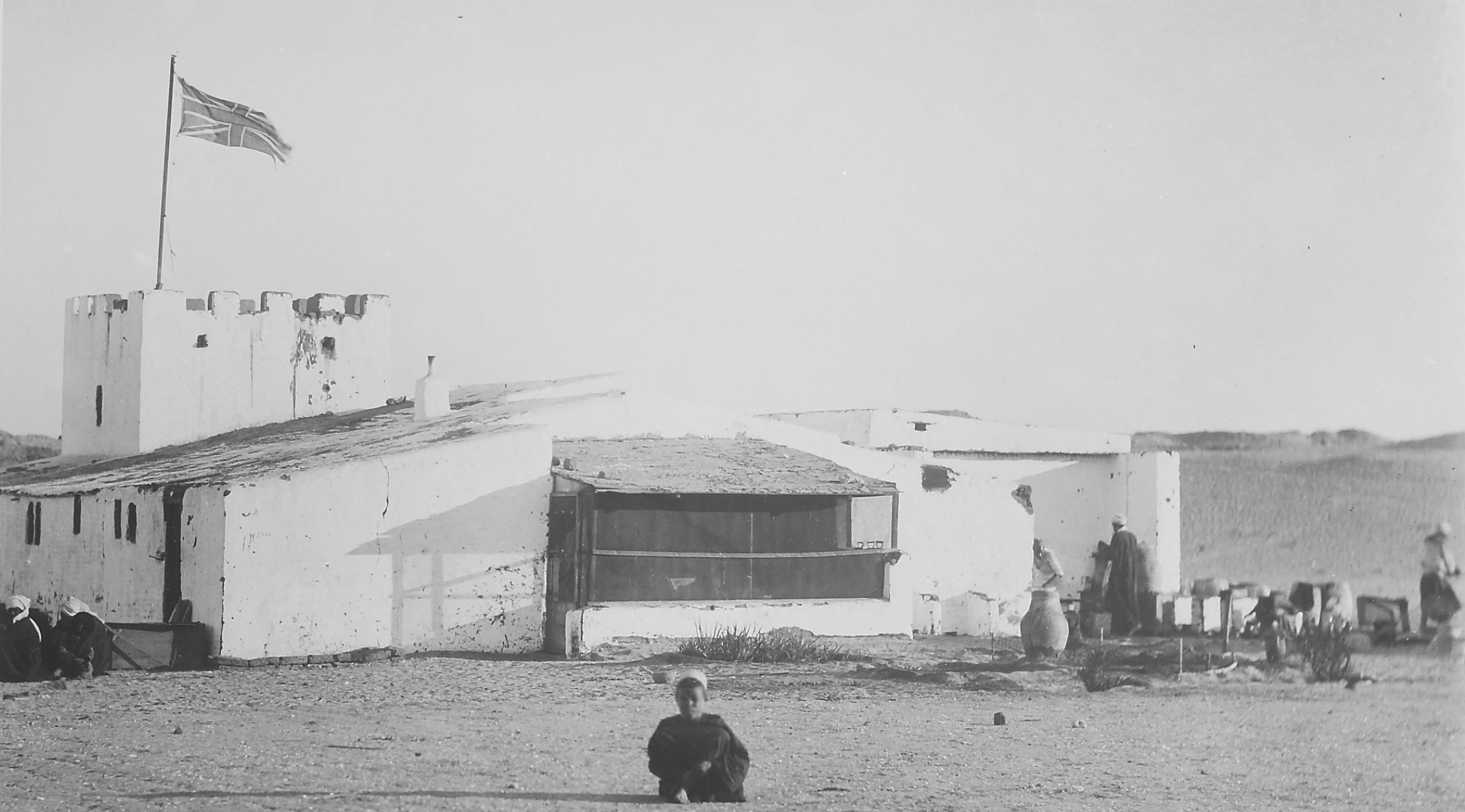 The “dig house” at Abydos

The dig houses at Abydos, from Flinders Petrie’s dig huts to the house Myrtle knew. “The beauty of this place passes description, a great sweep of pale gold desert, rolling sand hills & distant limestone cliffs in one direction, in the other more desert fringed by a line of palm trees marking the cultivated area of the Nile Valley. Every hour of the day the colours change & morning & evening the shadows take fantastic shapes. & sunrise & sunset flood everything with rosy light”.

Myrtle’s evocative description of the site of the desert “camp” used by the Egypt Exploration Society (EES) could have been written to recruit new team members. Their base at Arabah el-Madfuna on the west bank of the Nile was twelve miles from Baliana station and ¾ mile from the temple of Seti I at Abydos. Built of white-washed mudbrick, their house lacked the luxuries of Chicago House, the Luxor home of the Epigraphic Survey of the Oriental Institute, University of Chicago, but Myrtle loyally preferred it. After a visit to Chicago House in December 1930 for useful discussion of their methods of epigraphic recording, she told her mother: “we are now back in our own camp & we do not at all regret the grandeurs of Chicago House”. In 1935 when Professor and Mrs Breasted visited them from Chicago House, Myrtle and Amice hoped the Professor, founder of the Oriental Institute, “was impressed by the simplicity of our camp after the splendours of Chicago House”; Mrs Breasted at least seemed to like it, commenting that “it was the cutest place she had ever seen”.

The “dig house” where Myrtle lived was a far cry from the “dig huts” which British archaeologist Flinders Petrie and his team had occupied at the turn of the century. For the first season in 1899–1900, Petrie built a row of eight mud huts in the north-west corner of the enclosure walls around the temple site. Six of these huts were occupied by permanent members of the team, with the other two reserved for visitors. Hilda, Petrie’s wife, who worked with him, sketched the arrangements in a letter in December 1899 forming part of Petrie’s 1899–1900 journal:

She described the arrangements with satisfaction: “F[linders] and I have huts at one end of the building as usual [F and H], and the spare rooms [X] come next: then Miss Johnson. The dining-room has a real door and a real window facing east, which we shall use when the heat begins, meanwhile we use a south door, warmer these cold evenings[.] … The bed rooms have grass-mats as usual hung over the doorway. We have only taken to doors for the dining hut and one store-room”.

When they returned in December 1900 for the next season, Petrie found “our huts were a refuge of spiders, white ants &c, &c; and we had to turn everything out & clean up the place”. Hilda reported in the season’s journal that “it took some days … to get quite straight … and the store-room alone took a whole day to turn out, as the white ants had made utter confusion of it. Except for this it is pleasant to get back to the same old huts … of course they are a great deal larger and more comfortable than any mud-huts of a single season”. The dining room, store-rooms and the men’s four rooms looked onto a large square courtyard where two rough tables were used to sort finds, one supported on bricks erected by Hilda and one supported by two prehistoric pottery tubs. They aired their blankets each day, and dried their washing on market day on two ropes slung across the courtyard. The huts were twice the usual size with useful cupboards and racks mostly contrived by Petrie, and Hilda concluded that “we are much tidier and more civilised than before”. All “civilisation” is relative!

The following year, only two of the old huts were habitable, and Petrie built a new row of huts half a mile away, facing north. Petrie sketched the arrangements in his journal:

Erecting the huts took about a fortnight, though the courtyard, storeroom and well took a month to complete. Bricks ran short when a camel man stole nearly half their supply and Arthur Mace, who had previously worked with Petrie at Abydos (the “M” in Hilda’s sketch of the first huts) and was by then working at Giza, recorded in his own journal that he had received a letter from Petrie and “from its tone I gather that he is not so comfortable as he might be building his house over there, and that it has had some effect upon his temper”. Just as they were finishing on 2 January 1902, a twelve hour thunderstorm struck, with rain pouring through the roof of the Petries’ hut, soaking everything and requiring the floors to be dug out and refilled with dry sand.

However this proved to be too small and in June 1909 it purchased a larger dig house further north at Abydos from John Garstang of the University of Liverpool, for £50. Garstang had worked with Petrie at Abydos in 1899–1901 (the “G” in Hilda’s sketch of Petrie’s first huts).

John Pendlebury, who worked for the EES at Armant and Amarna between 1928 and 1936, visited Abydos in December 1928 and recorded the dig house at sunset. It was this house which Myrtle and Amice occupied from 1929 until 1938.

At the start of the first season, Myrtle occupied a single room in the tower. The local carpenter cut two windows into the tower walls for her, announcing with great pride: “Praise be to God, they will both open”. Through these she had “two of the most perfect views one could ever wish for. One across the desert to the pink hills, the other across the Nile valley”. The carpenter also made her some corner shelves (though Myrtle and Amice had to measure and mark up the odd bits of plank used for the shelves for him). She concealed these shelves behind a blue and white check curtain which matched her table cover, the floor was covered with grass mats, and the final result was “so cosy and pretty”.

In January 1930, after Mr Beasley’s departure, Myrtle moved into his rooms, which were divided so as to give her both a bedroom and a separate sitting room. She was quite sorry to leave her tower, but acknowledged that the swap was better for Nannie as “the steps up to the tower were a great trial to her”.

Myrtle clearly loved the environment, telling her mother: “After a while one accepts this wonderful climate as a matter of course. Every day the skys are deep blue, sometimes flecked with fleecy clouds, always the sun is shining, & now the fresh north wind blowing over the hot sand makes the atmosphere wonderfully invigourating. … Every day is perfect yet every day is different. Sometimes the outlines are clear cut & sparkling, another time the distance is veiled in an opal haze, the pink limestone cliffs change their colours every hour, & the desert sand varies in hue from the palest suggestion of mauve to deep orange”.