© Griffith Institute, University of Oxford, 2013-. Unauthorized use and/or duplication of this material without express and written permission from this blog’s owner is strictly prohibited. Excerpts and links may be used, provided that full and clear credit is given to Griffith Institute and "Wonderful Things" Blog with appropriate and specific direction to the original content.
Browse: Home   /   The team’s physical health – 2: Accidents 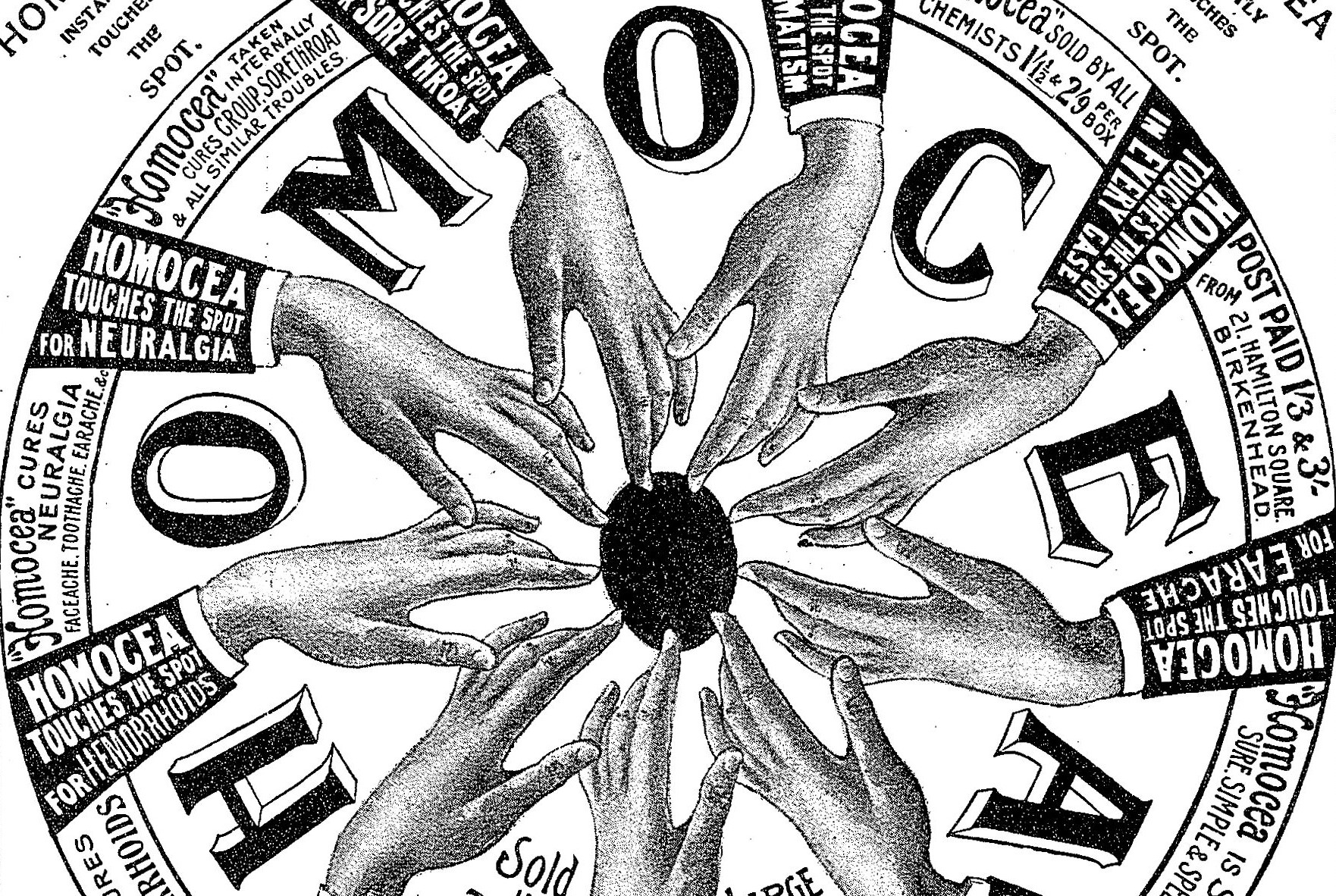 This post looks at some of the accidents, both minor and major, that happened to Myrtle Broome and her colleagues at Abydos.

The first accident that Myrtle reports was fortunately not serious. In January 1930 Myrtle was summoned to attend to one of the temple guards, Ahmud Abu Bekku, who had cut his hand on some glass. She told the messenger to “put his hand in clean water until I come” and, after gathering some handy rags, “hurried off expecting to see something very nasty and gory”. On arrival she “found the unfortunate guard half drowned” as “they had poured about 2 jug fulls over his hand, arm and gallabia & were preparing to empty a third over him”. The cut “proved to be nothing more serious than a rather deep gash on the second finger (it had bled rather a lot)”, so she “put a generous dab of homocea on a clean bit of rag & tied it up for him”. Myrtle had her tin of Homocea to hand to treat a cold sore on her lip. This seems to have been a contemporary cure-all, being advertised as treatment for haemorrhoids, neuralgia, rheumatism, sore throats, and eczema, as well as bruises, scratches, and wounds. She told her mother that blessings were called down on her, extending to her whole family, so she hoped her parents would benefit from her care for the guard too.

In March 1933 Amice’s nose was pecked by a raven which the guards had found in the temple unable to fly. Her nose “bled a little after it was pecked, & we dabbed iodine on so she looked funny that evening but next day there was hardly anything to show”.

In December 1934 Erica Pfaff, an Austrian recruited to the team that season for the less demanding tracing work, fell down the stairs from her room in the tower of the Abydos dig house, twisting her ankle. Amice strapped it up to prevent her twisting it again accidentally. The same evening, as Myrtle was locking the medicine cabinet, “Nannie [the housekeeper] came & said she had a strange pain in her ankle which hurt when she touched it or walked on it”. Myrtle “got her a pad soaked in Arnica & put a bandage round” and “hope[d] we will not have an epidemic of twisted ankles”. Coincidence or a bid for sympathy?

A year later, in December 1935, a very much more serious accident occurred when Otto Daum, another Austrian recruited to the team in 1934 to copy scenes and texts, jumped off the temple wall in the Hall of the Barks.

When Otto called to Myrtle that an accident had happened, she found him “clinging to one of the iron gates, his boot covered with blood & the ankle bone sticking out over the top of his boot”. He had dragged himself as far as the door into the Hypostyle Hall before shouting for help.

With the help of the team, Myrtle “got him on a chair, cut his boot off, set the bone in place as best I could & bound a slat from a drawing board as a splint to keep it in place, his wrist was all twisted & swelling & he looked ghastly”. She had immediately sent Sardic, the head servant, to the local police station (the nearest telephone) to call the police headquarters in Baliana to summon a car to take Otto to hospital. The police doctor, the hospital doctor, and two attendants arrived with the ambulance and put temporary dressings on Otto’s leg – a compound fracture which the doctor said would have to be X-rayed in Cairo – and wrist, also broken. Meanwhile Myrtle “rushed back to the house, packed a bag with his night wear & change of everything & whatever I thought he needed in Cairo, collected rugs etc & Nannie packed food & boiled water”. Myrtle accompanied Otto in the ambulance, which “tore into Baliana clanging a bell like a fire engine”. At a private room in the hospital, the doctors “redressed the leg & fixed a proper split”, while Myrtle sent telegrams to arrange for Otto to be met at Cairo. Myrtle and Otto then “waited 7 hours until it was time to go to the station for the 10-30 express”; while they waited, she “had to give necessary instructions to the male nurses after the doctors had left as Otto’s Arabic is limited to the needs of the work”. “At last 10 o’clock came & the ambulance came & took us to the station. I arranged for Sardic to travel with him & the Dr & I saw him comfortably settled. The Dr had arranged that the train should wait until he gave the signal to the driver”. The local police officer had ordered a taxi for Myrtle and sent a soldier to escort her back to camp where she arrived about 11.20 p.m., “feeling nearly dead”. Amice was in Cairo, so the whole responsibility for dealing with this had fallen on Myrtle. She told her mother that “the police & the doctors were simply splendid”, but unsurprisingly she was “dead weary”.

Four days later Sardic returned from Cairo to report that “Otto was settled in hospital & getting on all right … but by Sardic’s account he had a very bad time during the journey”. The following day Amice also returned to Abydos, having seen Otto in hospital where he was “getting on all right, they were two hours operating on his foot, & they say his leg will be shorter than the other. The wrist is not so badly broken & will be all right when the bone has knit together”. Amice gave some more details in a letter to Dr Alan H. Gardiner, the editor of the first three volumes of The Temple of Sethos I at Abydos: Otto had suffered “an open double fracture with complete dislocation of most of the ankle bones”, which the surgeon said “will be very slow mending & … there is danger of infection in the wound as the bone protruded through the skin & had some dirt on it”. Amice told Dr Gardiner that Myrtle had handled “this very difficult situation … very pluckily & efficiently, though it has given her a pretty bad shock”.

Better news came from Otto in early January, when he wrote to say that “he is getting on quite well, the first plaster case has been taken off. The Dr is very satisfied by the way it is healing & has put a new plaster case that holds the leg rigid right up to the hip. He has to be in this eight weeks but can leave the hospital soon”. By the end of January Otto had been discharged from hospital and was staying with Dr Herman Junker, head of the German Institute for Egyptian Antiquity and since 1934 Professor of Egyptology at the University of Cairo, with whom Otto had worked before joining the Abydos team. Myrtle told her mother that Junker’s sister-in-law [in fact, perhaps his sister Maria] was acting as his housekeeper, so she could help look after Otto.

By mid-March, when Dr Junker came to Abydos to collate the season’s work (to check the accurate reproduction of inscriptions), he could report that Otto was “beginning to get about with a crutch”. Myrtle had dinner with Dr Junker and Otto when she passed through Cairo at the end of the season’s work. She told her mother “Otto is now able to walk without a stick & has only a slight limp, but the poor man is suffering an attack of jaundice, I have never seen any one so yellow, & as he wears a greenish grey suit the effect is awful”.