© Griffith Institute, University of Oxford, 2013-. Unauthorized use and/or duplication of this material without express and written permission from this blog’s owner is strictly prohibited. Excerpts and links may be used, provided that full and clear credit is given to Griffith Institute and "Wonderful Things" Blog with appropriate and specific direction to the original content.
Browse: Home   /   “Lady Godiva” and UK holidays 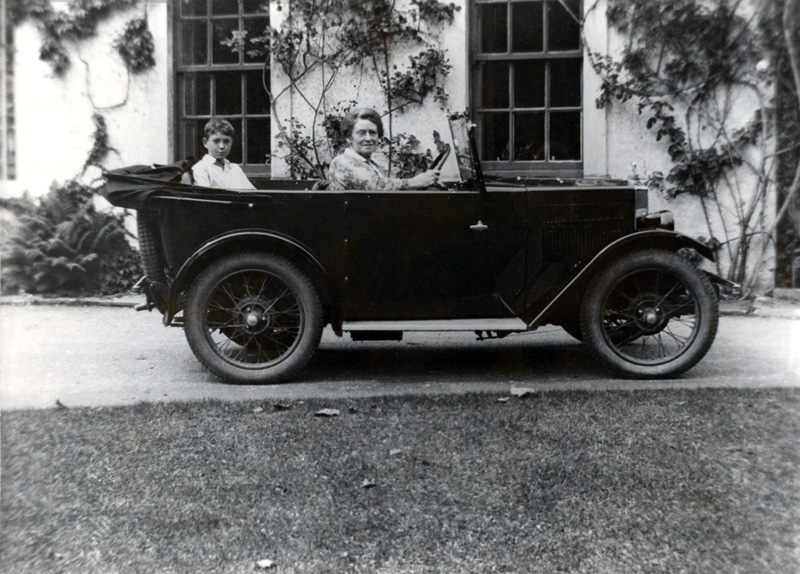 This post looks at the car Myrtle Broome acquired with her earnings and the touring holidays she took with her parents in the UK during the summer months when she was not working at Abydos, and contrasts the building of garages in Abydos and at her parents’ home in Bushey, UK.

“I am seriously thinking of spending some of my hard earned wealth on a motor car when I come home this summer, it will be something that we can all enjoy & we may just as well have a good time while we are all hale & hearty”.  So Myrtle Broome wrote to her father in March 1931, towards the end of her second season working with Amice Calverley at Abydos. It seems that neither of her parents could drive, since Myrtle debated whether to buy a second-hand car and sell it when she returned to Egypt in the autumn, or a new car which she would have to store during the winter whilst she was in Egypt – there was no question of her parents using the car in her absence. Her father supported the idea and sent her details of a Rover, but Myrtle herself favoured a Morris. She told him that a Morris touring car (seating four), which was £130 new, would be much cheaper to tax and insure than a Rover and did 40 miles to the gallon unlike the Rover’s 27. It was a significant expenditure in comparison with her monthly salary of £30 from the Egypt Exploration Society for the five months of each season. From 1 January 1931 until 18 March 1935 (when a speed limit of 30 mph was introduced in built-up areas) there was no speed limit for most private cars, but Myrtle did not want to drive at more than 40 miles per hour, so thought that “a 7 or 8 horse power would be powerful enough for us”. The priority was “to have a car that will seat 3 or four people comfortably”, and she considered a touring car preferable to a saloon (with an enclosed passenger compartment and a fixed roof or sliding head with a sunroof) since a touring car “is generally more roomy & one can easily fix the hood & side screens for wet weather”.

At some point during the summer, Myrtle did buy a new car, since her letters home during the third season are full of the details of building a garage to house the car, always known as “Lady Godiva”. It seems likely “Lady Godiva” was a Morris Minor Tourer.

Myrtle thought the first two estimates for the garage building work were “absolutely prohibitive – it’s the price of a small house”, though she acknowledged it was probably “the extras like the arch over the entrance which make it mount up so”. By 4 December 1931 a more reasonable estimate had been obtained from a local builder, Jaggard, who had also built the family home Avalon. Building work had started by 9 December and was finished by 12 February 1932, the workmen having been fortified by Mr Broome with cigarettes and hot cocoa during cold weather. Amice thought the final building “looks more like a church than a garage”.

The previous year “a splendid mud brick garage with a straw roof” had been created at Abydos for Joey, Amice’s car, with considerably less bother and expense. The old stable at Abydos had been cleared out, re-roofed, and finally white-washed by the servants, including the head servant Sardic who looked very rakish “with a white splash over one eye & another on his nose”. At the same time that Myrtle and her father were discussing the building of the garage at Avalon, new doors were made for the Abydos garage by the local carpenter. These were made in a single day, using the packing cases in which the stores came, and Myrtle told her father they were “excellent doors, most wonderfully patched together; of course they do not hang straight on their hinges, nor do they meet all the way up in the centre, but no-one troubles about little things like that out here”. She asked her father whether he could “imagine a British carpenter being asked to make double doors to a garage and being given packing cases for the job?”.

The Broome family’s first holiday in the new car was in Cornwall, based in Mullion on the Lizard Peninsula. With just three wet days in the fortnight, the choice of a touring car was vindicated. At the Falmouth Woolworths, they bought “magic shells” with which Myrtle entertained the local Egyptian children at the 1931 Christmas party in Abydos. These seem to have been “little camphor boats”, which Myrtle “set sailing in a soup plate”. Very small (2 cm) toy boats can be propelled by a surfactant which dissolves behind the boat; this creates a difference in the surface tension of the water causing the water to flow away from the stern of the boat, and so moves the boat forward. Soap or acetone have the same effect but camphor, being solid, lasts longer.

It was perhaps during this holiday that Myrtle painted these scenes of a Cornish village and fishing port:

Whilst Myrtle was working in Egypt, “Lady Godiva” remained at “Avalon” where her father periodically wound the engine. Myrtle assured him that “unless he requires the exercise, 7 or 8 turns are enough to circulate the oil”. In the spring each year, Myrtle sent instructions for George at the local Vale Garage (presumably in Vale Road, Bushey, just half a mile from “Avalon”) to collect “Lady Godiva” and get her in order for Myrtle’s return. Mr Broome was also required to liaise with Mann Egerton in Bond Street, London, to insure the car (at a value of £100) until the autumn – the Road Traffic Act 1930 only required a car to be insured while it was driven on the roads. Myrtle also had to renew her driving licence each year – under the Road Traffic Act 1930, licences cost 5/- and lasted twelve months.

The Broome family spent the first two weeks of September 1933 on holiday in North Wales. Myrtle took back with her to Abydos some “letter cards” of Wales, which were a great success with their local callers and “help[ed] make conversation”.

In late May/early June 1934 the Broomes holidayed in Scotland and the Lake District. One of the places they visited was Fort Augustus, half way between Inverness and Fort William on the Caledonian Canal.

There Myrtle bought a Christmas present for Nannie, their Abydos housekeeper – presumably from the Benedictine Abbey into which the eighteenth-century fort had been converted in 1876. In her 1934 Christmas Day letter Myrtle told her mother that Nannie “is simply delighted with her little crucifix from Fort Augustus. She says it is the nicest present she has ever had and is wearing it round her neck with great pride”. That winter in Egypt Myrtle had “the Wemyss calendar hanging up in my room a constant reminder of our lovely holiday. I often think of those glorious lakes & the snow topped mountains & all the beautiful places we had lunch & tea, it was an unforgettable holiday with Arnside to finish up with” – in the heat of Abydos, such memories were probably particularly welcome.