© Griffith Institute, University of Oxford, 2013-. Unauthorized use and/or duplication of this material without express and written permission from this blog’s owner is strictly prohibited. Excerpts and links may be used, provided that full and clear credit is given to Griffith Institute and "Wonderful Things" Blog with appropriate and specific direction to the original content.
Browse: Home   /   Christmas cards from Abydos 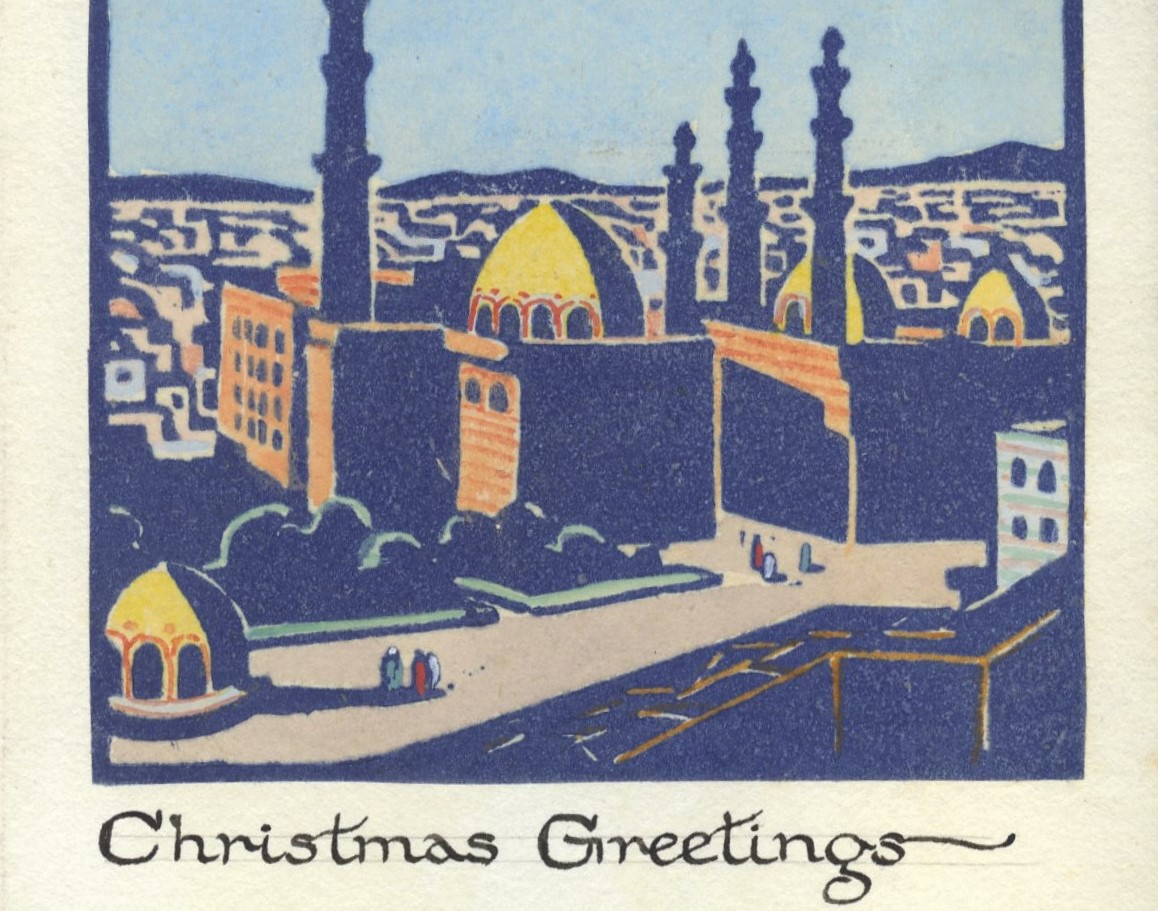 This post looks at some of the Christmas cards Myrtle Broome and Amice Calverley made and sent from Abydos to family and friends in England and Egypt.

As one might expect of two artists, Myrtle Broome and Amice Calverley made their own Christmas cards to send to family and friends. In 1929, Myrtle spent nearly all of her day off in early December making cards. She did not give any details of how she was making these cards, but two years later reported that she had cut a new stencil for that year’s cards.

Amice usually cut rubber stamps to print her cards, and Myrtle particularly admired one of her 1929 designs with a “string of camels, one can hardly believe they are all made with one stamp”. For her 1930 Christmas card, Amice made a new stamp of their dig house (though omitting two ramparts recently added to prevent the north wall from collapsing). She included a print of this in her Christmas Day 1930 letter to Dr Alan H. Gardiner, editor of the first three volumes of The Temple of Sethos I at Abydos, apologising that “that which should be white, is black, & vice versa – but my original intention was to print in white ink on sand-coloured paper. Alas, it didn’t work –”.

Each Christmas or New Year the whole Abydos team, both European and Egyptian, celebrated with a “fantasia” – a mixture of music from local or travelling musicians, comic skits by the servants, and other entertainments. Amice’s 1934 card showed a group of such musicians. She sent a copy to Myrtle’s parents, and another to Dr Gardiner, to whom she said “it will remind you of the time you and de Buck froze while watching the Abydos ‘Fantasia’”.

In 1931 Myrtle and Amice also sent some “novelty cards” – “beetley-bugs … made of melon seeds with some of my plastic wood & bits of wire from the window netting. They looked so like strange beetles looking out of the melon that we couldn’t resist giving them legs”, which they called “Melonious Scarabs” or “little friends from Abydos”. One recipient was G. H. F. Nuttall (1862–1937), a bacteriologist and Emeritus Professor of Biology in the University of Cambridge, who had visited Amice in Abydos in January 1929. He told Amice that he was “immensely pleased to receive … the ‘Melonious Scarabs’ which have had a cheering effect on members of my household and at the laboratory – I am springing the critters on unsuspecting naturalists with glee”. As a naturalist with a passion for collecting, classifying, and cataloguing specimens, Nuttall suggested that “a more accurate generic name might be Hydromelonius & you might consider this if you have not already sent in your description of the rarity to a scientific journal for publication”. Another recipient was the Egyptologist Percy E. Newberry whose works included three books on scarabs and who told Amice that “it was very kind of you to send me … the Melonious Scarabs which fortunately do not bite! … I shall keep [them] in my scarab collection!”.

In 1931 one of the Christmas cards Myrtle received from an English friend, Miss Collins, was particularly welcome. Their post was brought to them in their lunch break and, just as everyone had admired the card, the head servant Sardic reported a tiny leak in the generator’s cooling tank. Myrtle intended to plug the hole with the end of an old paint brush and plastic wood. However, on investigation she found a 2” by 3” piece of tin had rusted away leaving a hole with which her paintbrush handle could not cope. She told her mother: “The only thing for it was the Xmas card. The men emptied the tank, I tied a rope round outside the tank, used the card to cover the hole on the outside & then plastered up the inside with plastic wood which hardened quickly in the sun & made an excellent temporary repair, thanks to Miss Collins & Mr Woolworth [the source of the plastic wood]. You can’t say we are not resourceful”. In her next letter, three days later, Myrtle was pleased to report that the mended tank remained watertight.

In 1936 Myrtle was particularly adventurous, telling her mother in early December: “I have been making a little relief in plaster of our house with its background of desert hills. I am going to make a mould & some casts from it to send as Xmas cards”. The same year, their final Christmas in Abydos, Amice wrote a farewell poem to the pharaoh Seti, which she had printed for Christmas. In her poem Amice asked Seti whether she would in due course see him in Osiris’s kingdom and if he would “know that [he was] wed to a last and foreign wife, who gave [him] ten years of her life”; meanwhile she invited him to “come and take a look at [his] great temple in our book”.

Fortunately Amice’s cards were printed in time for Christmas 1936. The previous year Amice had sent her Christmas greeting to printers in Cairo who only delivered the cards on 30 December. On 31 December she enclosed a copy with a letter to Myrtle’s parents, wishing them “Happy Christmas past & Happy New Year to come!”. She explained to them that the printers’ machine had broken down and no-one would mend it until after the Ramadan feast, which fell two days after Christmas. When the cards did arrive, Amice found they were “nearly all … speckled with ink & thumb prints”, and that the printers had sent “some 5 or 6 hundred copies! (instead of 100). I suppose, having got the machine to work, they didn’t like to stop it!”.