© Griffith Institute, University of Oxford, 2013-. Unauthorized use and/or duplication of this material without express and written permission from this blog’s owner is strictly prohibited. Excerpts and links may be used, provided that full and clear credit is given to Griffith Institute and "Wonderful Things" Blog with appropriate and specific direction to the original content.
Browse: Home   /   Happy Birthday, Myrtle! 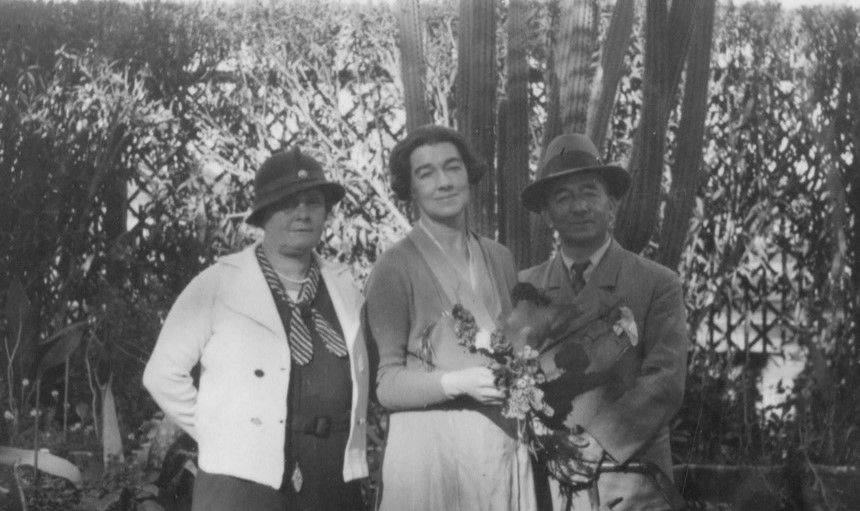 Myrtle’s birthdays were celebrated with birthday cake, presents and cards from family and friends in England and Egypt, as well as special meals. Some years there was entertainment from strolling Egyptian musicians, and in 1936 Amice and Myrtle spent the day crossing the Eastern Desert to the Red Sea.

From England, Myrtle received cards and small presents which could be enclosed with letters. In 1931 she had asked for two pink or yellow plain “Lady Jayne” sleeping caps which costed 1/ or 1/6 at the Watford hairdresser. Three duly arrived (though it seems her mother found it difficult to get the right colour), including a fancy one which Myrtle kept for “swell” occasions. Hair nets were multi-purpose items at the camp. The pink one matched her nightdress, but Myrtle also planned to wear the caps in the temple to keep her hair tidy on windy days. Back in the first season, Nannie had asked Myrtle’s mother to get her six hair nets to wear when doing housework. Myrtle’s caps were clearly more luxurious, as Nannie’s hairnets were two for just 3d at Woolworths.

Presents came also from the other European members of the team, friends in Egypt, and sometimes also from some of the Egyptian servants. Sometimes these were home-made – in 1931 Amice gave Myrtle a donkey egg cosy made out of kid glove, with long ears made from the fingers, and dress snaps for eyes. The following year Amice gave her a wreath of flowers from the garden and The Fortress, the recently-published third volume of Hugh Walpole’s Herries Chronicles; Dr Gardiner had given Myrtle the second volume, Judith Paris, the previous year. In 1932 Myrtle also received a figure cut out of limestone by one of the village craftsman, the gift of Charles Little (nicknamed “Little Un”), a third artist who worked with Amice and Myrtle from 1930 until 1934. Two years later Amice gave her a silk scarf and “Little Un” presented her with a snake skin and notebook. But the best present seems to have been “an amazing bird made out of pith and feathers” from “Young Ahmed”, one of the servants.

Nellie Maouchy (“Nannie”), the Syrian camp housekeeper, made Myrtle a birthday cake each year, and all the Egyptian servants and temple guards had a slice – at breakfast time! – when they came to wish her a “happy feast day”. By 1935 the three Sudanese soldiers who guarded the camp had heard it was Myrtle’s birthday and they too came to pay their respects – and hopefully also got their share of the cake. In 1931 Nannie made a special chicken pie for lunch, and in 1933 they had Christmas pudding for lunch “& all stuffed ourselves”. But these meals pale into insignificance in comparison with 1937, when Amice and Myrtle visited their friends Monsieur and Madame Roche in Nag Hammadi on 23 February.

On hearing Myrtle had just celebrated her birthday, M. Roche sent for champagne to go with their magnificent (and highly alcoholic) lunch – spinach and ham starter with white wine, turkey with red wine, omelette set alight with a bottle of rum, and finally liqueurs with their coffee (never mind the port on arrival!). M. Roche was head of the sugar refinery at Nag Hammadi. Myrtle and Amice first met him in 1933 when he wrote to thank them for looking after the Crown Prince of Italy and his retinue during their tour of the Temple of Seti I and brief trip into the desert. To the embarrassment of racing driver Marquis Brivio Sforza, his car had stuck in the sand and had to be rescued by Amice’s Jowett … but that’s a story for another post.

Myrtle’s 48th birthday in 1936 was rather different – it was the second day of Amice and Myrtle’s holiday trek to the Red Sea. She awoke in their desert camp (sleeping under a blanket in a hollow scratched in the sand) for a breakfast of hardboiled eggs (taken with them in bulk), bread without butter, and hot tea brewed by Sardic, the team’s major-domo, guard, adviser and head servant. As they drove east across the desert, they stopped to explore a Roman well, where they descended the circular staircase around the well-shaft to the water level and were rather out of breath by the time they emerged. Their next stop was at a Bedouin camp to deliver letters they had been given by the Egyptian frontier police when approving their equipment for crossing the desert. Later in the day they were thrilled when two gazelles sprang up in front of them and leapt over the rocks at a phenomenal pace. After a picnic lunch – of more hard boiled eggs, bread, oranges and dates – they continued through the desert mountains, which Myrtle describes with the eye of an artist: “the colours seen close are, the red of jasper, pink of granite[,] yellow and orange of sandstone … and in the distance paling to mauves and blues”.

They reached the coast at 4.30 pm and, five minutes later, were in the sea. After collecting shells, corals and shark teeth (Myrtle reassures her parents that they had not ventured more than 3 feet deep), they camped in the sand dunes for the night. The full story of this trip will be the subject of a future post.

A special treat for Myrtle’s 1933 and 1935 birthdays was a visit by the strolling Egyptian musicians who usually spent a night at Arabah entertaining the team once during each season. They played the songs of Abu Zaid, an old Arabian hero, on fiddles and a drum. These, and other musicians like the zumara players, were a recurrent delight to Amice and Myrtle – and to me – and they too will have their own posts in due course.