© Griffith Institute, University of Oxford, 2013-. Unauthorized use and/or duplication of this material without express and written permission from this blog’s owner is strictly prohibited. Excerpts and links may be used, provided that full and clear credit is given to Griffith Institute and "Wonderful Things" Blog with appropriate and specific direction to the original content.
Browse: Home   /   Mental health – 1 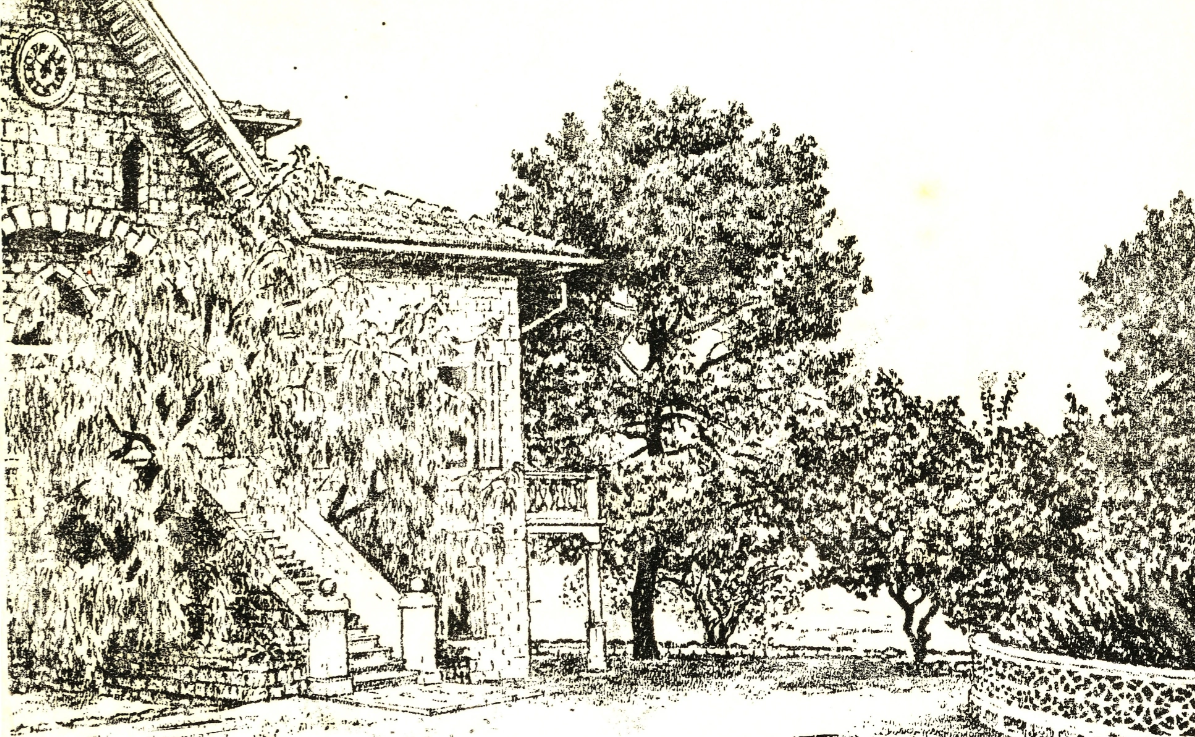 This post is the first of two looking at the impact that the intense work and isolated living conditions at Arabah el-Madfunah had on the mental health of some members of the team.

The relative isolation of the team at the Arabah el-Madfunah dig house, as well as the intense concentration required for the work in the Temple of Seti I, adversely affected the mental health of some members of the team. Myrtle herself seems to have been remarkably resilient, though she occasionally confesses to her parents that she is tired at the end of a season. However her letters, and the correspondence between Amice Calverley, Dr Alan H. Gardiner, editor of the first three volumes of The Temple of Sethos I at Abydos, and Professor James H. Breasted, founder of the Oriental Institute of the University of Chicago, which was the co-organiser of the team with the Egypt Exploration Society, make clear the strains on the team.

Amice Calverley herself from time to time became very stressed. At the start of the second season, she and Myrtle had planned to drive themselves in Amice’s car “Joey” from Alexandria to Arabah el-Madfunah, camping overnight. However, after the 130 miles from Alexandria to Cairo, Amice who had driven the more difficult sections “was quite done up; she broke down half way through dinner and [Myrtle] had to get her off to bed & give her a dose of brandy”.

Amice was able to join in the Cairo socialising but tired easily, and engaged a chauffeur to drive Joey to Asyut while she and Myrtle did the journey by train. Myrtle reported no further signs that Amice was under strain during the 1930–1931 season, but in January 1932 Amice was suffering from eye problems, which her oculist, Dr Max Meyerhof, told her were the result of “a form of strain caused by too much work – more due to brain & nervous system than eyes” and for which he prescribed a week’s rest if the problem recurred.

In September 1932 Dr Gardiner told Professor Breasted that Amice would have to restrict her work during the coming season as her nerves were in a bad state and she urgently needed at least six months’ holiday. Amice’s travel plans always tended to be somewhat uncertain, and when she joined Myrtle on the Yorkshire at Marseille towards the end of November 1932, Myrtle observed that Amice “was as usual very weary after a great rush to get off”.

Amice’s working season that year proved even shorter than expected, as she spent three weeks during January in hospital in Cairo with sinus trouble, though she returned to work in February. She still planned to finish early, with Myrtle reporting in mid-March 1933 that Amice would “be leaving very soon now. She has been feeling very tired & nervy the last week”. However Amice’s departure was delayed until early April after another member of the team, Charles Little, became seriously ill with typhoid. Amice stayed on until there was at least definite improvement, although Little was still not out of danger when she left. By this time Amice was, she told Dr Gardiner, “feeling rather done in myself what with the worry & things in general”.

Charles Little had joined the team in February 1930, replacing Mr Beazley whose work was regarded as unsatisfactory. Myrtle was initially cautious about how his arrival might disrupt team dynamics, telling her mother that “in some ways we are loath to have a stranger since we are so very happy as we are, but he may prove very nice, & anyway nothing definite is settled, we needn’t keep him on after the week if we don’t like him”. Fortunately, Amice, Myrtle, and Charles – quickly nicknamed “Little Un” – got on well. By 5 March 1930 Myrtle could tell her mother: “we are very pleased with Mr Little, he is like his name very thin and delicate looking … [with a] rather shy manner”. By February 1934 when Charles spent his leave in Cairo, Myrtle remarked: “we feel quite a gap. He has quite become a member of our little family”.

After recovering from the typhoid that afflicted him at the end of the 1932–1933 season, Charles returned to Abydos in November 1933. However in January 1934, Amice told Dr Gardiner that whilst Charles was doing excellent work, “he’s a queer lad – still not very strong after his illness & very nervous, but if left in peace & quiet, quite happy at the job which he does with exquisite neatness”. By mid-March 1934, Myrtle told her mother that Charles “has been getting very nervy & jumpy lately & seemed so queer that when the last Cooks boat came to Baliana, Amice went & fetched the doctor who was on board to come & see him”. Charles “could not work if there was the least sound; the men must not even converse in whispers & he drove the friendly sparrows away because their chirping irritated him & he plugged his ears with cotton wool so as not to hear the slight sounds of our brush washings & paint mixings & very occasional remarks. He took to working on our days off … & then tried to fix up a contrivance for electric light so as to work by himself at night. Amice put her foot down at that & he got in an awful state about it”. The doctor concluded that “physically he was quite fit, but mentally he was in rather a bad way … the isolation here, & the concentration necessary for the work was too much for his nerves” and strongly advised Amice to send him off as soon as possible, since “if he continued he might attempt something unpleasant”.

Myrtle said that both she and Amice were “dreadfully sorry about it, as [they] both like him and he does excellent work”, but she noted that “it seems the same thing has happened before in previous jobs”. Charles had previously worked as a draftsman at Megiddo from 17 April until 31 July 1928. Amice and Myrtle had understood that Charles left Megiddo after getting malaria. However Eric Cline in Digging up Armageddon says the cause of Charles’s frequent illness during that brief 1928 season was in fact “heart trouble that was thought to have been caused by his excessive smoking – up to forty cigarettes and ten pipes a day, according to one eyewitness”.

After seeing Charles off in Cairo, Amice told Dr Gardiner she thought that “if he has a quiet time on a farm with outdoor work & good food he should pick up soon” and asked whether Charles could go and work with Dr Gardiner’s son Rolf. Rolf Gardiner (1902–1971) was a rural revivalist campaigner who in 1933 had bought an estate at Springhead in Dorset, where he and his wife organised “land service camps” where students, young unemployed workers, teachers, university lecturers, miners, and social workers camped and worked the land, sang folk songs, danced folk dances, and hiked. Amice thought Charles was “in need of this sort of work & worth helping. The typhoid has so pulled him down that, had he gone on with this job, which requires endless concentration & gives no normal exercise, I fear he would have had a bad breakdown”. Whether or not he found work with Rolf Gardiner, by February 1937 Charles was married and working as a handy man on a chicken farm on the South Downs. He had met his wife Rosalind (known as “Ruth”) Trenaman on board the Dunluce Castle when he was returning from a visit to an aunt in Mallorca in the spring of 1936, and the pair were married within a month of their return to England. The couple soon moved to Brummana in Lebanon, where Charles had been born, and where their son Christopher was born in June 1937.

In the 1950s Charles joined the staff of the occupational therapy department of the Lebanon Hospital for Mental and Nervous Disorders in Asfouriyeh, where he set up a ceramic studio and later a workshop for metal and woodwork, as well as printmaking.

Perhaps one reason for Myrtle’s resilience was that she engaged more than the rest of the team with the local Egyptians, and so her life was less bounded by work and the team. Amice joined Myrtle on most of the feast day visits to the families of the Egyptian workers, which Myrtle thoroughly enjoyed. However Charles Little declined to accompany Myrtle even when Amice was away as he “regards these affairs as beastly bothers” and hated going to visit the locals, getting “nervy & irritated with the ceremonial coffee drinking etc that one has to repeat at every house”. Amice and Myrtle started Arabic lessons with the local schoolmaster, but Amice quickly gave up so it was only Myrtle who could truly converse in Arabic with the people they met. Amice tended to spend her leave with other members of the European community in Egypt. Myrtle too enjoyed visiting European friends, but also made a number of day trips and longer treks accompanied only by Sardic and other Egyptians, and engaged more fully with contemporary Egyptian life.